The Trouble with Nerds 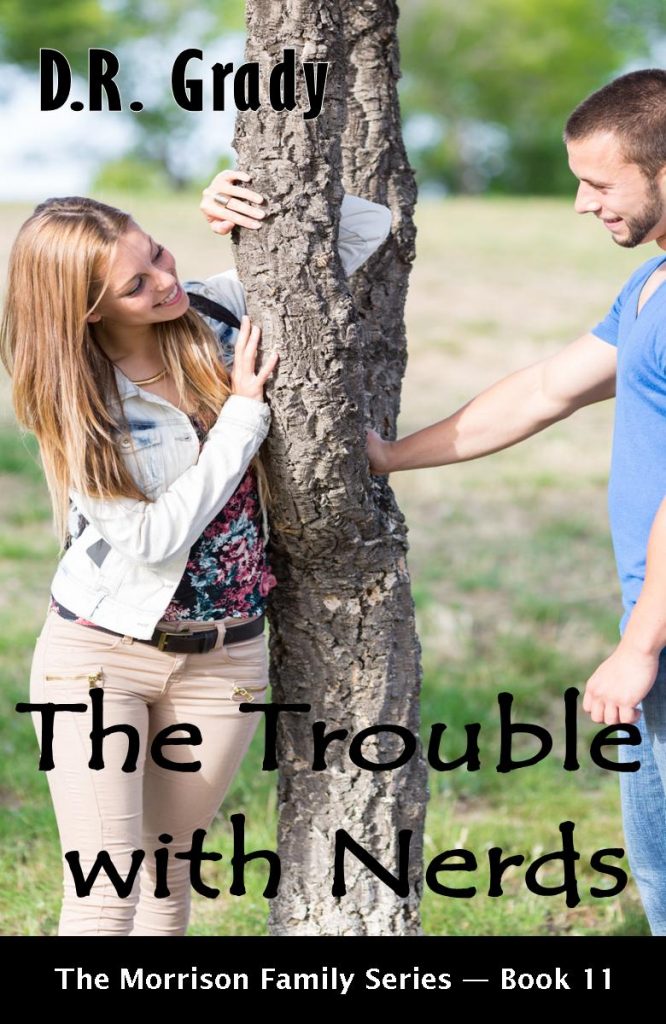 Odd things keep happening to Dr. Sara Newton. She’s a soon-to-be-unemployed pediatrician with an alleged stalker, a hot cop on her heels breathing dire warnings, and way too much student debt.

It doesn’t help that the hot cop is Clay Morrison, her best friend’s older brother. The man has made her heart pound and her palms sweaty since puberty. The trouble is, he only interacts with her when he’s expounding on new security measures. He sees threats everywhere.

Clay Morrison is frustrated. He hates his new job, misses his Army Ranger days, loves his well-meaning, pushy family—and when did sweet Sara Newton grow up? She won’t admit she has a stalker, and she won’t keep out of his thoughts. He can only protect someone in denial for so long. No matter how attractive she is…

Clay and Sara are circling each other, trying to meet in the middle. Then a brand new threat sends them in a completely different direction.

The Trouble with Nerds

The man kept to the shadows, his face obscured by the darkness. He scurried past several trash cans, and shimmied around a few trees. The streetlights lit up his face in spurts, but he turned his head, as though the frugal beams hurt his eyes. He peeked furtively around him every few steps, like a mouse making certain it was safe to grab the peanut butter.

Clay Morrison’s eyes narrowed. It wasn’t safe for this mouse to grab this treat. Clay didn’t look furtively around him. He had no trouble avoiding the light that would indicate his presence. The shadows melded him in their embrace as he sifted through them, became them. Two more steps into the darkness and his quarry paused again, raising his head as though to sniff the air.

As though he knew he was being stalked.

With a grimace Clay stepped right into the path of the not-quite-fleeing mouse. “Gareth Wright?”

The mouse jumped and squeaked. The man half-turned, so Clay clapped a hand on his shoulder.

Scared, nearly colorless eyes blinked up at him. Colorless described the man well. His skin, hair, and eyes all combined to form an unremarkable person. One who faded into the background without trying.

“We have some questions for you.” Clay straightened his shoulders and rotated one because his bullet-proof vest rubbed wrong. The t-shirt he wore underneath must be creased.

The easy motion sent those colorless eyes to the expanse of his shoulders, further enhanced by his police uniform. This uniform was all wrong. Clay still didn’t know what had induced him to enter police work. A military man, one used to blurry undercover work, should not immediately step into law enforcement. At least, he shouldn’t. Maybe some of his former colleagues would thrive here.

His unfortunate choice of career further proved he needed to stop listening to his relatives. Several hundred know-it-alls who didn’t actually know him that well, it seemed.

“I haven’t done anything wrong.” The mouse squeaked again. His Adam’s apple bobbed, and his eyes scurried around the outside of the hospital where the man had failed to show up for work the last few days.

“Your boss had some questions about your absence. Filed a Missing Persons Report.” His statement was mostly true.

The boss hadn’t particularly cared, but it gave them an opening to question the guy about his recent suspicious activity.

Clay didn’t wait for agreement. He nodded toward the hospital entrance and used the hand on the man’s shoulder to steer him to a small room within the building.

“What do you want to know?” Mistrust colored the mouse’s words.

Reaching into his pocket, Clay yanked out the photos of both Katy Greene, his cousin’s soon-to-be wife and Sara Newton, his little sister’s best friend. Casually tossing the pictures onto the table between them, he carefully noted the colorless man’s reaction.

His gut clenched as the little creep’s eyes gleamed a steady gray before he lost animation.

“I don’t know either of those women.”

“You’ve never met them?” His voice deepened because Clay knew both women personally. Instinct kept pushing him to rip this little mouse’s head off. Years of discipline prevented him. The side of the law he currently represented frowned on such behavior.

I need a new career path.

Wright shook his head. “I don’t know them.”

“You worked at two different hospitals with both of these doctors.”

His quarry jumped at the growled words. Clay dialed back his own emotions because they shot the room’s testosterone levels into the stratosphere. In a chest thumping contest, he would stomp this man into the ground.

He kept from baring his teeth, and instead pinned the man with a focused stare. He tapped Katy’s picture. “This woman vaguely remembered you, but the second one didn’t.”

Again, he watched for a reaction. Triumph flared for a millisecond and then died as the man scowled at Sara’s picture. “I work in the sanitation department.” He puffed out his chest. “But I might move to maintenance soon.”

“You have to show up for work regularly to be promoted.”

Clay didn’t blink for long moments. “You’ll need to take that up with your boss.”

He asked the standard questions they had to record before he scooped up both pictures and tucked them safely into a shirt pocket.

To further his professionalism, Clay even made a show of writing down a few responses from the man. Who seemed eager to return to work. Wright must have figured out he hadn’t done anything wrong, yet, so he had no need to run.

Greg Gilmore, a former secret operative, and married to Clay’s cousin, Janine, had discovered this mouse’s suspicious activities. However, the little man was nowhere to be found when they wanted to question him.

It had taken a week, but Clay managed to run him to ground. He had employed skills few police officers were taught.

“How did you find me?” The colorless eyes kept skittering to the shirt pocket containing the pictures of Katy and Sara.

Both women sported blue eyes and blonde hair, but were vastly different. Katy’s animated features veered toward cute. While Sara, little Sara Newton, had grown into a beautiful women. Her hair was honey colored and usually piled on top of her head, probably because a bun was the most efficient way to keep the sticky little fingers of her patients from getting entangled in the strands. While Katy’s eyes leaned toward an unusual purple hue, Sara’s were the clear blue of a perfect summer sky. Gorgeous eyes a man could get lost in.

Clay grunted as he cut off those dangerous thoughts and instead answered Wright’s question. “It wasn’t hard.” He left his response there. His flippant reply would hopefully make Wright panic—always helpful.

Wright pushed back his chair and stood, a little unsteadily. “I have to report to my boss.”

The scent of fear kept rising in the room. Clay didn’t bother to soften the edge in his voice. “As per the Central Derry Clinic, your current employer, you need to remain at least thirty feet from the two women we just discussed.” He tugged out a sheet of paper and tossed it across the small table.

The sheet landed exactly where Clay aimed. It fluttered dramatically before settling.

Wright’s eyes widened as he quickly scanned the mandate. “They can’t do that.”

“Yes, they can. And they have.” Clay took his time standing. He had discovered years before that this show of intimidation tended to quell bad guys when they had to look further and further up. The longer the process took, the more reasonable most became.

He tapped the paper, right at the bottom, which promised immediate dismissal if Wright ignored the mandate. Clay didn’t hold out much hope it would hold off this particular man for long.

D.R. Grady is a published author of clean romance novels. She lives with her husband near Hershey, PA and adores chocolate, laughing, collecting bags, books, and shoes. Oh, and writing stories that resonate with others.
View all posts by drgrady →
Bookmark the permalink.
This website uses cookies to improve your experience. We'll assume you're ok with this, but you can opt-out if you wish.Accept Read More
Privacy & Cookies Policy
Necessary Always Enabled